Analysis: The title of “The Wounded Bird” refers to a Surrealist poem by André Breton called Clair de Terre. The Surrealist movement had begun as a literary one and poetry was still an important and influential medium for surrealist artists. Many works of art were inspired by poems and the artists wrote poems, as Dalí did in later years.
The part of Clair de Terre that this painting represents was a dream: Breton shot a bird that fell into the sea and transformed into a cow before dying. Dalí also interpreted this dream in his painting “The Spectral Cow“, which was painted in the same year as “The Wounded Bird“. References to Breton’s dream can also be seen in “Little Cinders“, where there are many ghostly birds with the same simplistic form as the bird in this painting. This is one of several paintings Dalí completed during 1928 which experimented with the use of mediums other than oil. He had always been experimental in his choice of mediums, once finishing a painting using stems from cherries. Here Dalí has used sand; this gives stronger, more striking appearance against the textured sand. 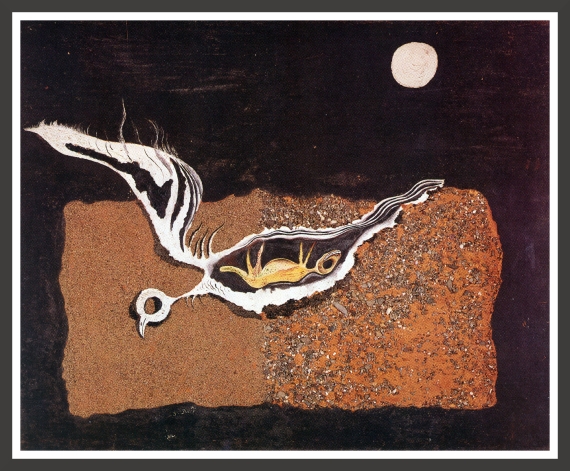 Analysis: Dali’s bestiary broke loose from reality at the end of 1926 to become altogether fantastic during 1928, which marked a very important period of transition in the painter’s work. This picture is part of a series in which the influence of Max Ernst is clearly visible, more particularly so in a painting such as “La Belle Saison” in the Urvater collection in Brussels.
However, Max Ernst’s influence is only superficial. Dali used it momentarily, with others, because at that time, already, trying to transcribe his dreams, he took advantage of this material just as he made use of the Mediterranean sand and gravel that he glued to the surfaces of the picture. Let’s make no mistake about it, in the works of this Mediterranean painter from the north of Spain, the monsters are nothing at all like those which, driven mad by the silent darkness of the nordic forests, spring up in the works of Hieronymus Bosch and all German civilization.
In a taped interview, speaking of the baroque, Dali said: “The luminosity of the rough part of the seashells from the grottoes of the Mediterranean gave birth to the grotesque, succeeding in thus making the joyous light of its own roots and its most obscure branches burst forth. While the monsters of Bosch are the products of music, of the forest, of the gothic, of obscurantism, the grotesque figures in Raphael come directly from Pompeii, from humanism and Mediterranean intelligence; all the grotesque beings of Bosch are only a protest: it’s the indigestion that the knights had upon returning from the Crusades! A Pantagruelian way of protesting against the Greco-Roman humanism. The grotesque figures painted by Raphael in the Vatican, on the contrary, are the affirmation of this intelligence, of this humanism, a way of dominating the monsters. With Raphael it is the conquest of the irrational, while the monsters of Bosch are conquered by the irrational. There’s the whole difference. And I myself am the anti-Hieronymus Bosch. Let us succeed in making monsters but may they be completely antagonistic and dissimilar! Dali, he is pure Mediterranean!”
All the pictures with collage of gravel and sand were painted at Cadaqués. The principal ones are “Unsatisfied Desires“, “Bathers“, and “Big thumb“. “The interesting thing in this Bird,” Dali has said, “is that with its side already monstrous, it carries in its entrails a thing which is a foetus and instead of the foetus being that of a bird, it’s a cat! The moon is there as in many other canvases of this period.” Going on, about the influence of Max Ernst, he has stated, “It is not the analogies which afford interest but the dissimilarities, even if I used a painting by Max Ernst. In the same way, the Phedra of Euripides becomes exactly the opposite when dealt with by Racine. In this picture it is the same thing instead of seeing an analogy with Max Ernst one should see what is absolutely the contrary. According to me, I perhaps take something of Max Ernst as a point of departure, but because of my Mediterranean heritage and my almost scientific side, I create with the elements torn from the soil of Cadaqués – that is, from the Mediterranean – a bird which carries an animal inside it, a monster which has nothing to do with the elucubrations of the Germans. In general, the critics see the petty analogy immediately and draw superficial or false conclusions from it. They are mistaken, but that is of no importance. Even false, only the amount of information counts.” 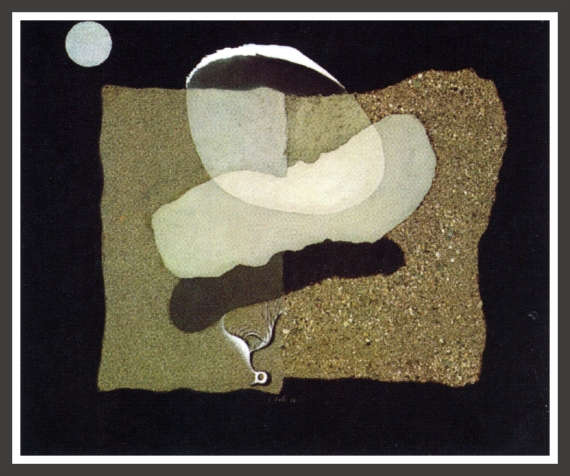 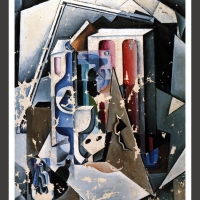 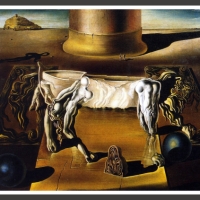